The Memphis group, an avant-garde group of Italian designers, was founded in Milan by Ettore Sottsass in 1981. According to various sources, the name was taken after the Bob Dylan song “Stuck Inside of Mobile with the Memphis Blues Again”.  The group’s work often incorporated plastic laminate that featured designs inspired by art deco, pop art and kitsch themes.  The Memphis Group’s furniture and design pieces were exhibited all over the world, and had a strong influence on the design of furniture, architecture and household items in the 1990’s.

Peter Shire, the featured artist of the exhibition Masterpieces & Curiosities: Memphis Does Hanukkah at The Jewish Museum in NY, became acquainted with Ettore Sottsass through a series of magazine articles, which highlighted their shared love of dubiously functional objects. Sottsass invited Shire to join the Memphis group.

Judaica objects, textiles, and artworks from the Jewish Museum collection that resonate with Shire’s expansive approach to form and materials, will be exhibited alongside an array of objects and ephemera relating to both Shire and the Memphis movement and exhibition objects will be displayed on shelving and pedestals covered in Memphis laminates produced by ABET Laminati.

Masterpieces & Curiosities: Memphis Does Hanukkah is organized by Kelly Taxter, Associate Curator. The series is organized by Jens Hoffmann, Director of Special Exhibitions and Public Programs. 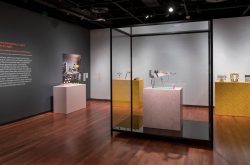